Business insolvencies in France at the end of April 2015: The numbers continue to slowly improve, at -2.7% on a year

The favourable swing first seen in 2014 continues. The immediate rise in business insolvencies in the first four months was partly due to a catching up after the artificially low year-end data, because of the industrial action within the court system, which has however resurfaced in May.

Although the strike action in the Commercial Tribunals caused certain volatility, the trend remains down

Year-on-year to end April 2015, the number of business insolvencies declined at a rate comparable to that at the end of 2014: -2.7% (following -2.9% in 2014). The 62,473 business insolvencies cost their suppliers 3.9 billion euros (-16.6%) and potentially endangered 174,786 jobs (-4.6%). This trend reflects specifically the temporary effects on household consumption associated with lower oil prices and improvements in company margins. 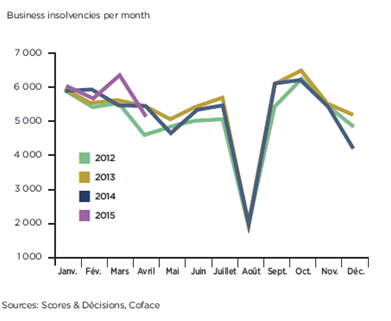 Whilst the indications from the January – April 2015 period might seem worrying, with a +1.6% increase in the number of insolvencies[1], the explanation for this transitory worsening lies in the delays in registrations as a result of the strikes involving the Commercial Tribunals in December 2014, leading to an artificial +16% rise in March 2015[2].

“As of the second quarter, we are expecting the level of consumption to moderate, given that energy prices are rising again. Elsewhere, thanks to the restrained recovery, company creations[3] are also on the rise (+2.8% in March 2015, against end of March 2014), which should lead to additional insolvencies between now and the end of 2015”, said Guillaume Baqué, Economist at Coface.

There was a sharp decline in insolvencies in businesses with turnovers between 2.5 and 10 million euros, at the same time as those among larger companies (over 10 million euros) increased as of the beginning of the year, but with a decline seen in April.

In terms of the 100 biggest insolvencies by turnover, three sectors stood out: Metals (15% of the total), Construction (17%) and Services to Individuals (5%), which joined this ranking for the first time. These were also the three sectors out of the eleven examined that experienced increases in insolvencies. 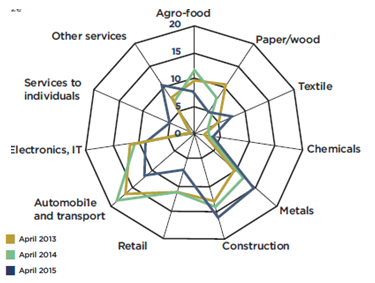 There has been a certain amount of change in the map of insolvencies in France. Six regions recorded clear improvements, with declines in the number of insolvencies of more than 5%, particularly in Aquitaine (-10.2%) and Limousin (-8%).

Only five regions recorded higher levels, ranging between +5.1% for Alsace and +0.3% for the Ile-de-France, the region containing 19.7% of all insolvencies in France. In these two cases, the construction sector was hardest hit, in particular builders of private houses in the Ile de France region who experienced a +10.3% increase in insolvencies.