“Coface achieved good results in 2013, with a robust technical performance highlighting the quality of our risk management in a still very fragile economic environment. This performance also shows the success of our strong operational and financial management over the last three years.

Our commercial growth dynamic is strong, with new business generation up 29% in 2013, a positive factor for the current financial year. Growth is more than ever at the core of our strategy, and will be driven by innovation and a multichannel distribution approach aimed at seizing profitable growth opportunities throughout the world.

With a solid operational and financial profile, our group looks forward with confidence and enthusiasm to the proposed initial public offering envisaged in the first half of this year, subject to market conditions.”

1.KEY FIGURES AS AT 31 DECEMBER 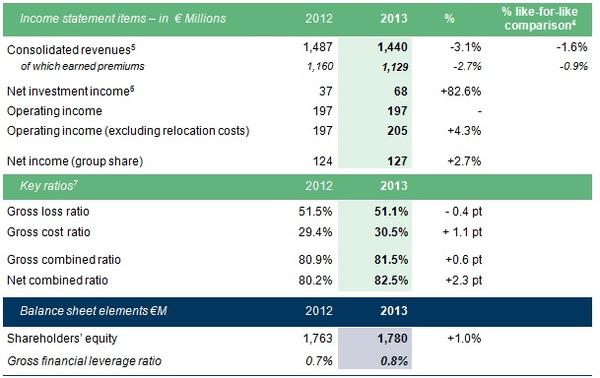 New production of contracts in the financial year increased strongly (+29%) to €157M compared with a 13% decrease in 2012, resulting from the priority given to the strict risk management actions decided in 2011.

The retention rate increased by two points at 88%, highlighting clients’ loyalty to Coface and prices were stable after two years of falling prices.

The commercial upswing was felt in all geographical regions in 2013,although the impact on earned premiums took place at different times in the financial year. In the fourth quarter, growth thus reached +6.3%1, on a constant consolidation scope and exchange rate basis compared with the fourth quarter of 2012.

3.STRONG PROFITABILITY DESPITE THE ECONOMIC ENVIRONMENT

In 2013, Coface continued to implement the risk monitoring policy it initiated in mid-2011. The flow of reported claims thus declined by 5.1% while the economic environment remained fragile.

In parallel, Coface reduced its cost base by streamlining processes.

The group’s financial assets management was unified and centralized during the year, leading to a reallocation of assets and resulting in capital gains of €28 million. As a result, net investment income increased by +83% to reach €68 million.

The 1.0% growth of the group’s shareholders’ equity to €1.78 billion (group share) is due to net income of €127 million, reduced to take into account an interim dividend (€65 million), a reduction of currency translation reserves (€29 million), and the adverse effects of the revaluation of our portfolio due to a rise in interest rates.

The group’s financial position remains strong with a net financing rate below 1% at the end of 2013, thus allowing Coface scope to consider solutions to optimise its capital structure.

Based on the recovery of the Eurozone, the acceleration of growth in the United States and on the maintenance of dynamic growth in emerging countries, Coface anticipates a slight increase in global growth in 2014 (an increase of 3.1% compared to the 2.5% recorded in 2013).

Benefiting from an efficient operating organization and a solid financial structure, Coface is concentrating its efforts on innovation and rolling out its offer to generate profitable growth throughout the world.

In 2014, the main aims of Coface’s growth strategy are:

This strategy will be pursued in light of Coface’s constant concern to accompany businesses in their development and secure their commercial transactions, the breakdown of the know-how and expertise of Coface employees worldwide.

[1] On constant consolidation and exchange rates.

[5] Insurance premiums are now recorded net of rebates. Revenues and ratios were accordingly recalculated for 2012 and 2013.

[6] Including capital gains of € 28 million, resulting  from changes in financial assets management.

[7] Excluding income from discontinued operations in 2012 and relocation costs in 2013.

[8] In 2012, the Group recorded a positive adjustment on its reinsurance commissions paid during previous years.