Risks have been upgraded to ‘moderate’ in the retail and automotive industries in North America and the services industry in emerging Asia whereas no sectors in Western Europe are as yet classified as ‘moderate’ risks.

In Asia and North America, dynamic private demand continues to improve sector risks. According to the synthetic risk indicator[1] developed by Coface economists and enhanced by its underwriters' experience of companies’ payment behaviour, the improvement in credit risk is focused on these two regions.

In contrast, we are maintaining our ratings for all sectors in Western Europe, because, although the overall trend is towards stabilisation, this region remains difficult and highly uncertain (see appendix).

In Europe, services are affected by a contraction in investment by businesses, individuals and the local authorities, with profitability falling 2% year-on-year. In Germany, however, services to businesses remain dynamic.

Weakened by major upheavals caused by globalisation and by demand shocks from a spate of financial crises, the textile and clothing industry had a ‘medium’ credit risk in the three regions under review. In Europe, the textile industry is relatively robust, but sales in the clothing sector are suffering due to dwindling consumption. The French situation confirms the textile sector’s newfound energy,with the number of insolvencies almost halved since 2009, despite an increase for French companies as a whole. At end October 2013, of the 62,431 insolvencies recorded by Coface in a year, only 83 were in the textile sector.

The European textiles sector remains competitive despite low-cost products from emerging countries, but the real key to success lies in innovation. The struggle to survive has forced many companies to invest in technical textiles, generally in niche markets. The Scandinavian countries were the first to take the innovation leap by restructuring their textile industry. Sweden, for example, traditionally invests more than the rest of Europe in R&D, with a spend equivalent to 3.4% of GDP compared with 2.25% in France and around 1.5% in Spain and Italy. It also trains engineers to meet the industry's real needs.

The innovation drive is certainly paying off. But the question remains regarding the long-term stability of a sector which is faced with raw material price fluctuation, the need to fund innovation and the threat of competition from emerging countries that are moving upmarket. 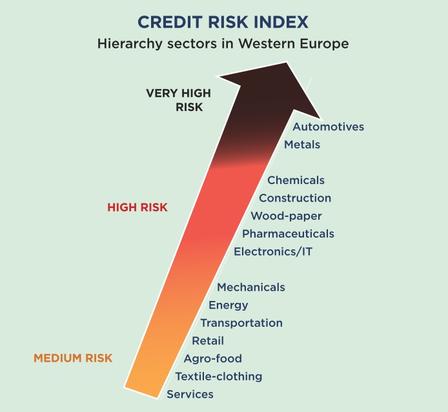 [1] Coface's credit risk indicator is based on changes in financial data published by over 6,000 listed companies from Emerging Asia, North America and the European Union of 15 countries: the change in turnover, profitability, net indebtedness ratio, cash flow and claims observed by Coface analysts. It is broken down intofour risk categories: moderate, medium, high and very high.


To read the full report, which includes an in-depth analysis of the European textiles sector and see all the updated risk ratings for all sectors and regions, please click here.