Most countries in Central and Eastern Europe (CEE) are experiencing a slowdown in GDP growth, rising insolvency rates and high unemployment due to the economic crisis in the Eurozone, according to the latest Panorama report from international credit insurer, Coface. However, the company stresses that the picture across the region is not uniform – GDP per capita ranges from just below €3,000 in Ukraine to over €17,000 in Slovenia – and Coface is optimistic that the recovery in Western Europe will have a positive impact, especially on more open economies like Slovakia.

The Panorama includes Coface’s fifth annual study of The top 500 companies in Central and Eastern Europe1, which ranks the flagship companies in the CEE region by their 2012 turnover and analyses their performance to see if there are positive indicators for the sectors and countries they represent. Overall the top 500 increased their turnover by 5% to over €628bn but there was a sharp fall in profits of 32% to €20bn as margins were squeezed. 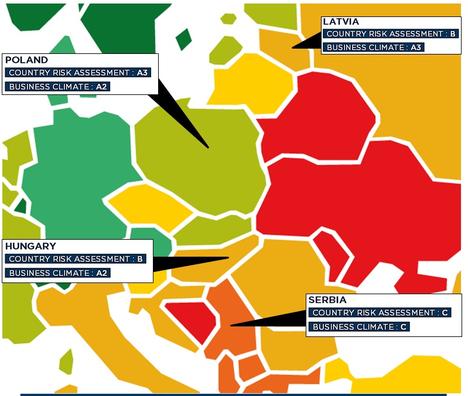 Oil and gas sector companies featured most frequently in Coface’s top 500, with 65 companies generating a turnover of €162bn although overall net profit had shrunk by 34.6%. Energy suppliers were second, with 51 companies reporting turnovers of around €76bn but again net profit was down by 32%. Automotive sector companies were ranked third with around €35bn although net profit had declined by nearly 7%. The biggest increases in turnover in the top 500 were reported by car distribution businesses (+41%) and food industry and wholesale (+14%). The sectors which showed downward tendencies included construction (-9% turnover and a net loss of €207mn), electronics (-6% turnover and a decline of 31% in net profit compared with 2011) and steel (-5% turnover and a loss of €623mn).

Coface’s Panorama also includes its economic forecast for the 12 countries within CEE. Yves Zlotowski, Coface Chief Economist, commented: “In general, household consumption has been constrained by high unemployment rates in the region, and public debt has led to fiscal tightening measures which will continue to hamper activity. The average growth in GDP is just 1.2% compared with 5% in emerging markets but the picture is not uniform across the region: some countries such as Ukraine and Slovenia have been severely affected while the Baltic countries of Estonia and Latvia have proven resilient, largely because their key export markets are in relatively good health ”.

Katarzyna Kompowska, Coface Central Europe Region Manager added “We will continue to monitor developments in emerging Europe and advise clients about the business opportunities. Despite the current difficulties in some countries, we believe CEE remains a promising region for economic progress in Europe.”

The report highlights the widely contrasting fortunes of CEE countries, including:

Latvia - to join the Eurozone on 1st January 2014
Latvia has hit the headlines recently2 with the European Central Bank recommending its acceptance in to the Euro. The economic outlook is positive, with inflation forecast to increase by 0.2-0.3 percentage points next year, according to its central bank governor. GDP growth is also improving; following a 20% contraction in GDP over 2008-2009, Latvia had the highest growth rate in Europe in 2011- 2012.  The unemployment rate has undergone a significant drop, falling from more than 20% in 2010 to 13% in 2013.

Poland - slow and steady recovery for one of the UK’s top trading partners
34% of the companies within the Top 500 companies are Polish, generating a turnover of €234 bn. After recording the strongest growth within the entire EU in 2011, the economy in Poland slowed sharply in 2012 and there was a decline in investment. The economy has been affected by the sharp European slowdown, combined  with  a  set  of  government measures  intended  to  reduce  the  public  deficit. Poland is heavily dependent on Germany which accounts for 25% of its exports.

Serbia - progress in EU negotiations sparks interest from other Balkan States
The biggest market in the Balkans, currently rated as C, or ‘high risk’ by Coface, will begin membership talks with the EU in early 2014 (neighbouring Montenegro, and Macedonia have been accepted as EU candidates while other Balkan states such as Kosovo, Bosnia and Albania have applied for EU membership).  The Serbian economy was limited by the economic situation in the EU, the main trading partner and although expected to recover in 2013 following a sharper recession in 2012 than forecast, it will not achieve the government’s 2% growth target. Growth  will be underpinned by exports and higher output from  the  modernised  refinery  of  the  NIS  oil  company  and  from the mining sector and will be buoyed by continued public investment in infrastructures.

The country and sector profiles form part of a study undertaken by Coface about the top 500 companies in the CEE. To read the full report, click here.