Insolvencies in Central and Eastern Europe 2013

Companies in the CEE region faced a challenging year in 2013: The already weak economic situation deteriorated and household consumption decreased due to fiscal measures designed to tackle rising budget deficits. Access to credit was further constrained in line with reduced supply and demand for new loans. This situation affected companies directly and forced them to lower their sales targets. Moreover, exports - expected to contribute to GDP growth - suffered from the Eurozone slowdown, where Central and Eastern European economies traditionally conduct most of their foreign trade.

Result: nearly 70,000 companies in the region were insolvent in 2013, an increase of +5% compared with last year. Bulgaria recorded the highest increase in insolvencies at 39%, with 834 cases. This situation can be traced back to a decrease in demand, difficulties in accessing credit and the lack of programmes supporting business activities. Excluding Hungary, where the drop in insolvencies is due to a change in legislation, Latvia is the bright spot in the CEE region, with a reduction of 7% in the number of insolvencies. This positive result mirrors GDP growth of an estimated 4.6% and rising private consumption in this Baltic country.

“CEE countries faced a challenging business environment over the course of last year. They suffered from low household spending but also a recession in the Eurozone, which is, for most, their main trading area. The Czech Republic, a country strongly dependent on exports to the advanced EU countries, confirmed that picture – both on the macro (the two-year recession) and the micro levels  (sharp rise in insolvencies of 26% in 2012 and 32% in 2013)”, explains Grzegorz Sielewicz, Economist for the CEE at Coface.

Subdued demand, decreased household spending and growing competition have a direct negative impact on the retail and wholesale trade sectors. During the second half of 2013 a slow rebound had already begun after a slump, supported by low inflation and returning consumer confidence.

The construction sector remains under pressure in the CEE countries and the performance of the sector, which has been poor for a prolonged period, did not improve in 2013. Following a ‘domino effect’, other industries linked to construction were also affected, i.e. metal -working, machinery manufacturers. The short-term outlook is just as bleak. The inflow of EU funds from the new budget for 2014-2020 will affect companies’ financial situations at the end of 2014 at the earliest. In addition, companies are still reluctant to start fixed asset investments as they are not convinced that the economic slowdown has come to an end and that an economic revival is about to start.

The first quarter of 2014 appears more positive in terms of economic outlook. Coface anticipates that the average growth rate of CEE countries will nearly double, increasing from 1.1% in 2013 to 2.0% in 2014. The drivers of this improvement will continue to be the Baltic States, with Latvia and Lithuania at the top of the CEE region and forecasted to grow 4.2% and 3.4%, respectively. The other CEE economies will also experience higher growth rates compared to 2013. The main source of growth will be increased exports and private consumption. In this improving environment, companies should feel more comfortable with their business transactions and investments.

Despite the recovery, growth in Western Europe will remain moderate, at 1.0% in 2014. Two stable economies will be the main drivers of this growth – Austria and Germany, which should record growth rates of 1.7%. Both of these countries will benefit from the upturn in household consumption supported by the lowest unemployment rates within the EU, rising salaries, as well as growing external demand for their products.

Companies in the CEE region will benefit from the improved situation of their main foreign trading partners. It will take time before companies become less restrained with their business activities and results are seen in their financial results. While Poland and Latvia should show a decrease in the number of insolvencies in 2014, the rest of the region will experience an increase. Czech Republic, Hungary, Romania as well as Croatia and Slovenia will record the highest increases. 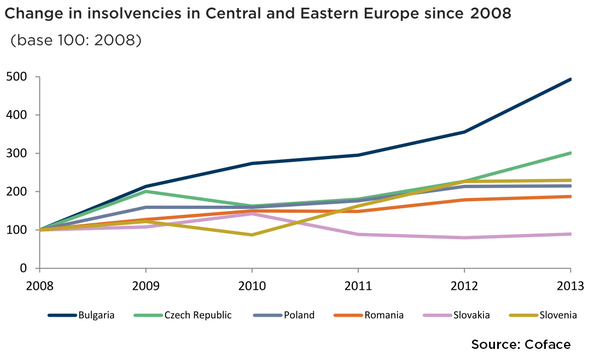