What to expect from Brazil’s perfect storm?

Brazil is in the midst of a perfect storm. The enduring political crisis and deep economic recession, which led to the collapse of confidence indexes, have now been topped by an impeachment trial of President Dilma Rousseff. No significant economic rebound is expected before 2017. Brazil’s economy contracted by 3.8% in 2015 and a further drop in GDP of 3% is expected in 2016.

On May 12 2016, President Dilma Roussef was temporarily removed from office, after the Senate voted an impeachment trial. The proceedings against her mandate concerned breaches of the Fiscal Responsibility Law and were particularly based on fiscal irregularities. Now that the Vice-president Michel Temer (PMDB party) has assumed the presidency, the Upper House will have 180 days to convene a trial to discuss the charges. Dilma will be definitively impeached if two-thirds of the Upper House vote in favour, in which case Temer will serve out the remainder of the presidential term, ending in 2018.

The Car Wash was the main reason for the uprising against Dilma’s government. The investigation has brought some of Brazil’s most important businessmen and political figures to justice and has raised suspicions that Petrobras’ money may have been used to pay for political campaigns, to buy political support in Congress and for personal enrichment. It has already been shown that Petrobras did a write-down of 6.2 billion reals (roughly 2.3 billion USD or 0.1 % of GDP) in its 2014 balance sheet, which referred to additional costs improperly capitalised in the corruption scheme uncovered by the Car Wash investigation.

Although the market has been reacting positively each time there is news favourable to the impeachment we should not expect a strong rebound, as the vice-president’s party is also being investigated for corruption – which makes it difficult for them to present a viable alternative to the current government.

An economy on the brink of collapse, waiting for the resolutions of the new government

On the economical side, the results for 2015 (-3.8% GDP YoY) were the worst since 1990 and none of the country’s main challenges have improved. The adjustment of administrated prices (which were artificially low) and the strong depreciation in exchange rates drove inflation to 10.7% a.y. - well above the target midpoint of 4.5%. Fiscal adjustments have failed and public debt, as well as fiscal deficit, deteriorated in 2015. Coface downgraded the country’s assessment from A4 to B (significant risk) in September and then again, to C (high risk), in January 2016. The three main credit rating agencies have downgraded Brazil to junk status.

The economy will not begin its recovery before the political impasse has been totally resolved.
The first challenge will be the fiscal results for 2016. Currently the 12 months accumulated deficit by March 2016 stands at 2.28 %, thus the 1.6% proposal of Dilma’s government already seems unrealistic.

The revival of business confidence seems only temporary in the short-term as Temer is taking up office with only weak support from the population, as he was not voted by direct elections and as his party is also highly linked to the Car Wash corruption scandals.

Only two indicators are expected to improve in the short term: trade balance and inflation. As regards foreign trade, both imports and exports have been falling in terms of revenues. Although the sharp depreciation in exchange rates over the last year has finally improved the competitiveness of locally manufactured products, the weaker currency has reduced export prices in USD. Thus far, the improved export volumes have not been enough to result in higher revenues.

Insolvencies reached a new record high, as a spillover effect of the Car Wash operation and the ongoing recession. In 2015, 1,287 companies filed for chapter XI in Brazil, a high of 55 % YoY. 409 requests have already been filed in the first quarter of 2016 (+114 % YoY). This figure corroborates the opinion that the negative trend is likely to gain further intensity in 2016, with the country expected to report a second year of contraction. 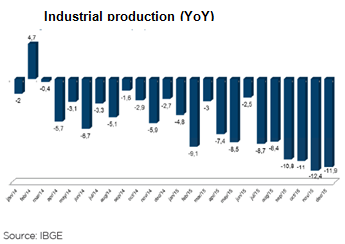 Industrial production has been slowing for 24 months in a row. In the 12 months accumulated until February 2016, the sector contracted by 9 % and there are no signs of improvement as yet. The population is definitely not willing to consume, as the job market has been deteriorating very fast and entrepreneurs are not investing due to the environment of high uncertainty.

The unfavourable scenario has also spilled over into the economy´s major sectors, leading to higher insolvency rates. According to Coface’s sector barometer, the country’s main segments of activity are currently at high risk. The situation is still worse for the construction, automotive and steel industries, which are currently at very high risk.

“There is no easy way out of the crisis and population is tired of corruption, which makes a short term rebound in confidence unlikely”, says Patricia Krause, Economist for Coface Latin America.

The anti-government protest of March 13th was the largest in the country´s history, with 3 million participants. It showed that the population is not only displeased with the incumbent government, but more in general with all of the politicians under investigation. Moreover, whatever the outcome of the political dispute, the high fragmentation of Congress will continue to hamper the advancement of the country’s much-needed structural reforms.

In summary, two things are clear. An economic rebound will not be immediate. There should be slight improvements in confidence indexes and possibly mild GDP growth rates starting in 2017. However, some agents are already forecasting that the current decade will be a lost one, in terms of economic activity. 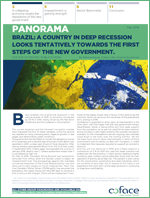 Download this press release : What to expect from Brazil’s perfect storm? (258.05 kB)


Brazil: a country in deep recession looks tentatively towards the first steps of the new government.