Coface estimate the number of insolvencies in 2013 will be at a historic high of 62,500 and that small and medium sized enterprises (SMEs) have been hardest hit.

Coface economists revealed that company insolvencies in the year to October 2013 rose by 4.3% to 62,431, close to the level seen during the economic crisis in 2009. Failures among SMEs rose by 8% in the autumn although intermediate-sized businesses were less affected. The amount owed by insolvent companies also fell by 7.4% to €4.25bn in the year to October 2013 but this still represents a high proportion of GDP at 0.21%. 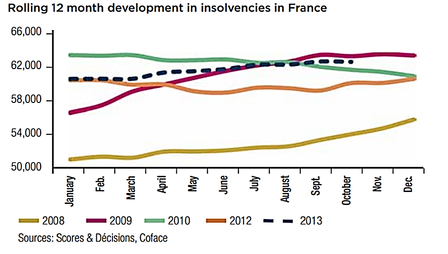 Since France is the UK’s second largest trade partner in the EU, representing 14.6% of our exports by value1, the report may sound alarm bells for many UK businesses. It also follows a succession of bad news from France: contraction in the economy and a decline in the level of business activity in the third quarter2; the decision by Standard and Poor’s to cut the country’s credit rating; and the European Commission Survey which found a sharp fall in consumer confidence in November, in contrast to the rest of the Eurozone.

Coface has already raised concerns about the trading risks in France. In June, the company reported a high rate of insolvencies, particularly among SMEs and noted that the highest risk sectors were construction, automotive and transport, electronics and food. In this latest Panorama, Coface suggests the risk outlook may be improving in the chemical and paper-wood sectors where insolvencies have fallen over the last 12 months. However, the situation in the high risk construction sector continues to weaken with a rise in insolvencies of 5.1% in the 12 months to October 2013;1 in 3 insolvencies in France relate to the construction sector. This deterioration is reflected in the news that the value of the UK’s exports of mineral fuels to France fell by 32% in September.

While there was a slightly more positive outlook in June within the textiles sector, this progress has been reversed by reduced consumer spending and fierce competition among clothes and shoe retailers which led to a 4.8% year-on-year rise in insolvencies at the end of October. The retail sector, particularly specialist stores, remained sensitive to the economic situation with an 8.1% rise in insolvencies and an alarming 43.3% increase in the cost of insolvency.

Grant Williams, Risk Underwriting Director at Coface in the UK & Ireland said: “The French economy is still in considerable difficulties and confidence is at a low ebb as the Government attempts to restructure. The resilience of intermediate-sized companies offers some hope and the overall cost of insolvencies is coming down but the vulnerability of the construction sector is a major concern given the continued importance of the UK’s mineral fuel exports to France.

“In this climate, the best protection for British businesses is information. This will allow companies  to exercise the necessary caution when offering credit terms to construction companies without missing out on copper-bottomed business opportunities. As France’s leading source of credit information about companies’ payment history and financial position, Coface is the ideal partner for exporters who want to trade safely and profitably across the channel.”