Is the recovery finally under way? That is the question being asked after a start to 2016 marked by a series of positive indicators for the French economy. But after several false starts and as many dashed hopes since 2009, caution remains the order of the day. There are grounds for optimism however: growth accelerated in the first quarter and, more importantly, it is no longer solely reliant on household consumption. Business investment appears to be finally picking up and will make a positive contribution to growth this year, for the first time since 2012. The increase in companies' margins made possible by the low oil price and government measures to alleviate the burden on businesses seem to be finally paying off. Company insolvencies are down sharply and are set to shrink by 3.2% for the year as a whole. This trend is reflected in companies of all sizes and in all regions (except for the Ile-de-France and Centre regions).

The only cloud on the horizon is that exporting companies in most business sectors (chemicals and aeronautics being the only exceptions) are suffering from the slowdown in demand from emerging countries. This rather positive outlook has reduced sectoral risks, with six sectors out of the 12 studied (automotive, construction, pharmaceuticals, chemicals, distribution and transport) being reclassified and only one, textiles-clothing, being downgraded. The road transport sector, which is the particular focus of this overview, is a good example of the current French growth dynamic (expected to be 1.6% this year and then 1.3% in 2017). After several difficult years, companies in that sector are now benefiting from the combined effects of a fall in the oil price and growth in household consumption. As in the economy as a whole, however, although company insolvencies are down and formations up, structural weaknesses remain. In the medium term, the sector will remain constricted by its lack of price competitiveness, while the risk of repeal of the Schengen agreement will have a negative but moderate impact (estimated at 0.4%) on road transport. 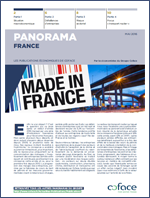 
Is the French economy definitely taking off?