Turkey is experiencing a severe economic slowdown, coupled with a jump in inflation, as a result of the sharp depreciation of the lira during 2018. This sharp depreciation has resulted in reduced consumption, and has impacted investment dynamics in the domestic market. The import-dependent structure of production has pushed the inflation rate to all time high levels, which forced the central bank to deliver a large rate hike in September. Although this rate hike has helped the Turkish lira to recover from these historical weak levels, it caused borrowing costs to rise extremely high, making funding extremely costly for both businesses and households. Growth is expected to remain very subdued and inflation at double digits.

These conditions have highlighted exports as an important source of revenue for the economy, despite many challenges. Government support remains vital for exporters to gain new market shares. This support has been mostly in the form of incentives for trade fairs and accessing new markets, among other methods. However, limited sophistication and competitiveness are restraining factors for further expansion of Turkish exports. Clients’ barganing power and the low level of technology incorporated in exported goods restrain higher gain from exports.

The crisis has deteriorated Turkey’s production and consumption dynamics. In 2018, industrial production posted an annemic growth of 1.6% while the manufacturing PMI1 fell to 42.7 in September, indicating that business conditions remain challenging. Indeed, from the PMI to other consumer and business surveys, all indicators have declined, showing a sharp drop in confidence levels for both companies and consumers in the country. With high inflation (hitting an all time high of 25.24% in October 2018 YOY), increased borrowing costs, and rising unemployment, household demand is expected to remain low in the first half of 2019.

New economic plan suggests a new balancing in the economy...

According to the new economic program announced in September 2018 by the government, Turkey will enter a rebalancing period between 2019 and 2021, based on steady growth rates and narrower current account deficits. Recent data reflects with this perspective, as the country recorded a total current account surplus of USD 7.3 billion between August and November 2018. Total current account deficit narrowed to USD 47.3 billion in 2017 (5.5% of GDP) to USD 27.6 billion in 2018 (close to an estimated 3.3% of GDP) However, this decline in deficit is mostly related to the decline in domestic activity rather than a lower dependence of Turkey’s production system on imported intermediate goods and raw materials. The financing side of the current account deficit, however, indicates that portfolio investments recorded an outflow of USD 3 billion in

1 - The Purchasing Manufacturer Index (PMI) is an indicator of the economic health and performance of the manufacturing sector, which covers several sectors mainly linked to industrial production. The PMI is based on five major indicators: new orders, inventory levels, production, supplier deliveries and the employment environment. The purpose of the PMI is to provide information on current business conditions within several 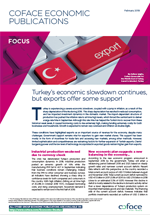